Serving the needy since 1945

More About Our Team
Super User

......are affectionately called "Anna" (Brother) and "Akka" (Sister) within our ashram premises. Dr. Rajaram and Mrs. Lakshmi Rajaram have been key personalities behind the institution's success in the past two decades.

Dr. S. Rajaram is a commerce graduate from Madras Christian College in Chennai, India. He was only 19 years old when he was given this responsibility after his parents (the founders') demise. Since 1974 he took over the enormous task of managing this organization accompanied by his wife Mrs. Lakshmi Rajaram.

Dr. S. Rajaram created an awareness among the public to participate in festivals like Diwali, Christmas, Ramzan, Pongal etc. with the ashram residents, by not only helping financially, but also by showing love and affection. His efforts gave new and wholesome lives to thousands of orphans and destitute women who are being rehabilitated every year. Dr. S. Rajaram is a recent recipient of the Padma Shri award.

Mrs. Lakshmi Rajaram is a post graduate degree holder in Philosophy from Madras Christian College in Chennai, India. She works with complete dedication everyday towards the sole cause of providing a better life for her family of 400+ residents.

It is their sincerity & dedication that motivates both Dr. and Mrs. Rajaram to work hard, mobilize public opinions, raise resources, and undertake projects for the growth of this establishment.

Since 1974, when they started managing the affairs of this institution, both have contributed very significantly in various departments towards the growth of this organization. Due to their initiatives, sincerity and involvement, today Sivananda Saraswathi Sevashram has its own buildings and infrastructure that can maintain a huge family of more than 400 residents of all ages. Sivananda Saraswathi Sevashram has a strong group of dedicated, highly motivated, and sincere employees who work towards the ashram’s cause.

Besides these two key leaders, the institution is also backed by a trust/committee comprising of experts like leading entrepreneurs and various other professionals. 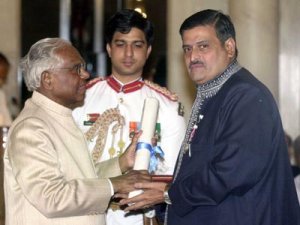 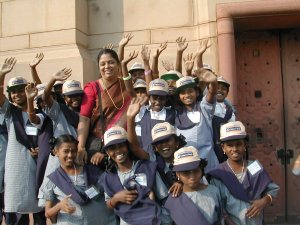 Lakshmi Rajaram with children during a vacation in New Delhi